Impressionist art includes many of the world’s best known and most expensive artworks, leading to some of the most shocking art thefts in living memory.

From a string of missing Van Goghs to the theft at gunpoint of Impression: Sunrise on a rainy Parisian morning and the possible burning of a Monet masterpiece, impressionist works have been under threat from criminal activity for decades.

The year 1990 was a particularly bad year for thefts of impressionist works, with three paintings being stolen from different French museums on the same day in July. They included Renoir's Portrait of a Seated Woman, stolen from the Louvre after being cut from its frame.

Happily, most of the artworks on this list were recovered after the thefts but some are still missing to this day. Indeed, art crime expert Dr Noah Charney has said (citing the theft of the Mona Lisa in 1911) that being stolen

"is probably the best thing that can happen to a work of art in terms of its prestige factor."

Read on to learn about the top 10 Impressionist art thefts.

The Lane of Poplars at Moret (Alfred Sisley, 2007)

Part of an astonishing theft that saw 13 artworks taken, Manet’s ‘Chez Tortoni’ was stolen from the Isabella Stewart Gardner Museum in 1990.

As well as Manet’s 1887 work, the Boston museum also lost pieces by Rembrandt, Vermeer and five works on paper by Degas.

The most important work taken was Rembrandt's The Storm on the Sea of Galilee, Rembrandt's only seascape.

In total, the works stolen had a value of a cool $500 million.

The theft was audacious and extreme: on March 18th 1990 (which happened to be St Patrick's day), two men disguised as police officers buzzed the door to the museum in Boston. It was 1.24 am and they said they had been called out about a disturbance.

A security guard let them in and the thieves handcuffed him and the other guard on duty. The security guards then had their eyes taped shut and were taken to the museum's basement.

For 81 minutes, the thieves ransacked the museum’s most valuable artworks, making two trips to the car to load all of their bounty. None of it has been recovered.

The reward for the paintings now stands at £7.5 million. 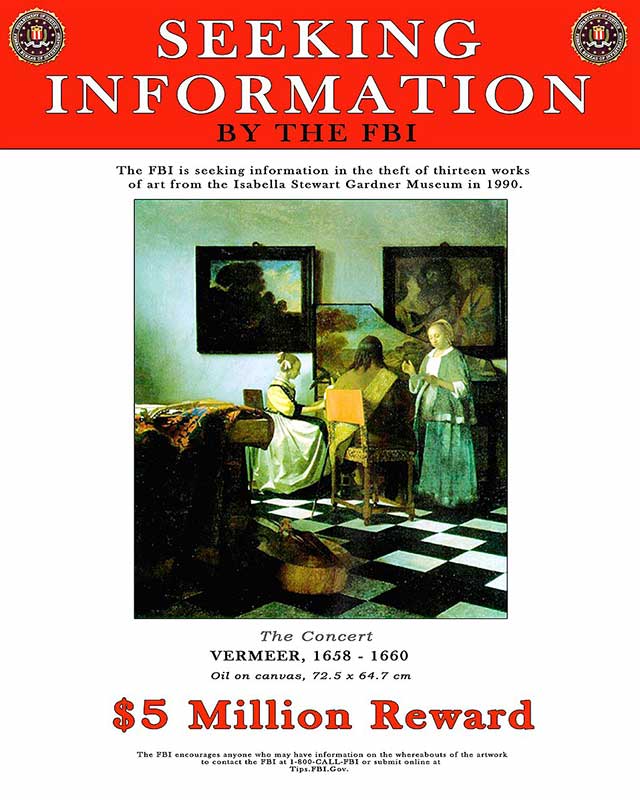 The Gardner robbery is the single largest property theft to date.

The Gardner Museum still hopes the paintings will be returned, and has three large empty frames in one of its premier galleries.

Behind a wall in west Dublin?

The source has said that the missing paintings are:

In May 2021, Netflix released a four-episode documentary on the theft.

Entitled This is a Robbery: The World's Biggest Heist, the mini-series explains how the robbery happened and charts attempts over the next thirty years to catch the perpetrators and recover the paintings. Suspects - such as the Italian and Irish mobs - are identified and eliminated as the bodies pile up.

In total, nine Impressionist paintings were stolen from the Marmottan Museum in Paris in 1985.

The loot included five paintings by Claude Monet and two by Auguste Renoir, with a combined value of hundreds of millions of dollars.

Among the missing paintings was Impression: Sunrise by Monet, one of the 10 most important impressionist works, which has been credited with giving the Impressionist group their name. as the Curator of the Marmottan said when the painting was recovered, Impression Sunrise

"... marks a turning point in the history of modern art."

Learn more by checking out our Impression: Sunrise page.

At 10am on October 27th 1985, two men paid for their entrance to the museum where they were then joined by three more accomplices. Threatening the guards at gunpoint, and forcing tourists to the floor, they grabbed the paintings they were looking for and left quickly (two had to be removed from a glass case).

The theft was made easier by the fact the museum alarm system was only turned on at night.

For five years the paintings went unrecovered. However, French police managed to link the theft to organised crime in Japan. Through the painstaking study of recorded telephone conversations, the authorities were led to an apartment in Porto-Vecchio, Corsica.

All of the works were found stashed in the apartment and were recovered, though some had been damaged during their long journey.

The damage to Impression: Sunrise was relatively slight--it only required treatment against humidity damage. The damage to Monet's Field of Tulips in Holland and Berthe Morisot's Young Girl at the Ball was more severe: Monet's painting had been slashed, and Morisot's had two holes in it.

One of Monet’s most famous series, the Charing Cross Bridge works (1899-1904), stand as valuable examples of the Impressionist painter’s skill.

They are so highly prized that one work in the series was stolen in October 2012.

The painting was taken from the Rotterdam Kunsthal Museum, along with paintings by Picasso and Matisse. The lost art was valued at a total of €200 million.

A group of Romanian art thieves were convicted of the crime but the paintings were never recovered. One member of the group claimed that his mother had burned the Monet masterpiece in her stove to “destroy the evidence”.

Traces of pigments and canvas were found in the ashes of the oven but whether or not they belonged to the paintings has never been proven.

With an estimated worth of $55 million, Poppy Flowers by Van Gogh presents a tempting target for art thieves.

So much so that it has been stolen twice from the same museum!

In 1977, the painting was taken from the Egyptian Mohamed Mahmoud Khalil Museum in Cairo. The work was missing for 10 years until it was eventually recovered in Kuwait. The details of this case are still largely unknown.

In 2010, the work was taken again, cut from its frame in the same museum. Egyptian officials announced that it had been recovered shortly after it was taken but their declaration turned out to be false.

Eleven culture ministry employees were found guilty of negligence as the museum’s security measures were woefully lacking. Only seven security cameras were working during the theft and none of the alarms in the museum were turned on.

To date, the painting has still not been found.

Taken during the millennial celebrations on January 1 2000, this Cézanne masterpiece was stolen from the Ashmolean museum in Oxford, UK.

At 1.30am, the thieves cut a hole in the skylight of the museum roof, dropped down into the gallery via a rope and stole the painting. They used a smoke bomb to cover their tracks, obscuring the CCTV.

This painting has never been recovered and the individuals responsible have still not been found.

It has an estimated worth of over £3 million.

Alfred Sisley’s 1890 work, The Lane of Poplars, was stolen from the Musée des Beaux-Arts in Nice.

The painting was purloined together with Monet’s ‘Cliffs near Dieppe’ and two other works by Jan Brueghel the Elder, with a combined value of €22 million.

Amazingly, this was the third time this work by Sisley had been stolen as it had previously been taken in both 1978 and 1988.

The robbery was executed by four or five individuals. They entered the museum at 1pm on a Sunday in August. They had a targeted approach and knew the location of each of the paintings they were looking for.

Evidence suggests that they tried to steal a fifth painting, also by Sisley, but they dropped the work and broke its frame. Finding this painting too heavy, they abandoned it and sped off in a getaway van and motorbike.

The paintings were eventually recovered thanks to a simultaneous FBI operation that aided the French authorities and in 2011 the thieves were sentenced to length terms of imprisonment.

Van Gogh’s works have long been a popular target for art thefts.

This painting and 20 others were stolen from the Amsterdam Museum in 1991.

Worth a total of £500 million, the paintings were simply removed from the wall where they hung in an audacious inside job.

The theft ended in farce almost as soon as it had begun: the thieves getaway car got a flat tyre and was abandoned, with the paintings being recovered just 35 minutes after they were reported missing!

The full list of stolen works was restored to the museum within 24 hours.

It was later found that the individuals responsible included a museum guard and an ex-employee of the museum’s security team.

Thieves broke through the roof of the Van Gogh museum in Amsterdam at 7am and stole two of his most famous oil paintings.

They left behind a ladder and rope, thought to have been used to get inside the building and as the exit route.

Painted in 1882, View of the Sea at Schveningen is considered to be one of Van Gogh’s most impressive artworks. The second stolen painting, ‘Congregation Leaving the Reformed Church in Nuenen’ from 1884-85, had been stolen twice before, including in the 1991 theft.

The paintings were missing for well over a decade. However, in September 25th, 2016, they were recovered in Naples, Italy. The criminal operation was thought to be linked to the Camorra, an Italian mafia-type criminal organisation in Naples.

The robbery at Stockholm’s National Museum lasted only minutes before the armed thieves sped away in a boat moored close to the museum.

Two paintings by Renoir and one by Rembrandt were stolen from the Sweden institution in December 2000.

All three paintings were small so it was possible for the works to be grabbed off the walls quickly and easily.

‘Young Parisian’ by Renoir was the last to be recovered, found in Los Angeles, U.S. in 2005. The other Renoir, ‘Conversation’, was found in Stockholm during a random drug investigation and the Rembrandt was also recovered unharmed.

$164 million of artworks were stolen from a private museum in Zurich in 2008, in a theft considered to be the largest in Switzerland’s history.

‘Ludovic Lepic and His Daughters’ by Degas and paintings by Cezanne,Van Gogh and Monet were all stolen from the Buehrle Collection.

The theft was the second in the area in a week following the loss of two Picasso works from nearby Pfäffikon. The thieves forced their way into the museum just 30 minutes before closing time, ordering staff to lie on the floor and threatening them at gunpoint.

They left with the paintings. Surprisingly, the Monet and Van Gogh paintings were recovered undamaged in a car outside a Zurich psychiatric hospital not long after the theft. A third was found much later in Serbia. However, the Degas is still missing.

These top 10 art thefts demonstrate the enduring value of Impressionist art and the lengths people will go through to get hold of them. They are a shocking insight into the world of international art theft.