Discover What Is Impressionism?

Today, impressionism is the world's most popular artistic movement.

But when the impressionists were trying to establish themselves in Paris in the 1860s and 1870s, things were very different: they struggled to persuade the public and the conservative art establishment that their new way of painting had any merit whatsoever.

On this page, we explain what impressionism is and why it was so controversial, and we introduce the main impressionist painters.

Who are the Impressionists?

What are the best Impressionist paintings?

When was the Impressionist period?

Here are some examples:

The work of the impressionists was usually barred entry from the most important annual art exhibition, the Salon of the Academy des Beaux Arts.

The conservative jury of twelve established painters did not consider the work produced by the impressionists to be art. They were instead looking for scenes of historical, mythological or religious figures; scenes that used largely dull tones; and scenes where brush strokes were not visible.

Here are some examples of works loved by the Salon's jury:

The fact that the impressionists were largely barred from exhibiting at the Salon meant that life was hard for them. They eventually took to organising their own exhibitions, holding eight between 1874 and 1886.

But the reviews were horrific, especially to start with. For instance, Monet's Impression Sunrise (exhibited in the first exhibition and now one of the most famous paintings in the world) was compared with wallpaper in its early stages and Cezanne was labelled a "madman".

By way of further example, one of the critics wrote the following about the impressionists' second independent exhibition (held in 1876):

"... five or six lunatics deranged by ambition have put together an exhibition of their work. They take canvas, paint and brushes, splash on a few daubs of colour here and there at random, then sign the result. The inmates of the Ville-Evrard asylum behave in much the same way.”

There were also caricatures and hostile cartoons, such as: 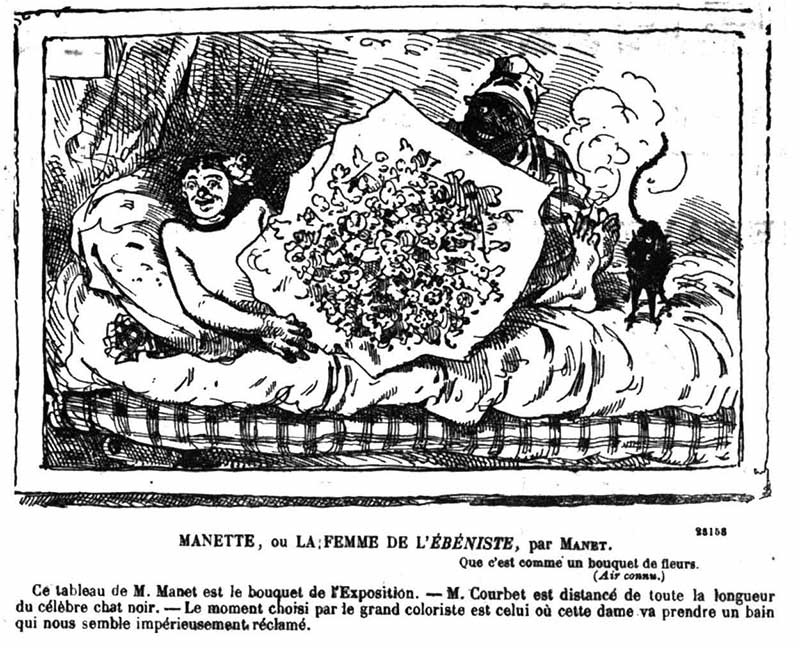 But the impressionists were not to be brow-beaten. Check out our timeline page and video to learn more about this period:

Rejection from the Salon also meant that the impressionists could not find buyers for their works: for the most part, the bourgeoise of Paris did not want to buy works of art lampooned by the critics. Claude Monet, in particular, often lived from hand to mouth: he sent scores of begging letters to friends and supporters in the late 1870s asking for small sums of money to buy food.

These difficulties might have crushed a single painter or indeed a group of painters who were not so tightly knit. But the impressionists were friends as well as artistic colleagues. They supported one another financially and pastorally, often meeting to discuss their ideas at the Cafe Guerbois and later the Cafe Nouvelle-Athens in Paris.

Their works started to be accepted in the 1880s, thanks to the help of dealers like Paul Durand-Ruel, with prices climbing by the end of the decade.

2. Who are the Impressionists?

Claude Monet, the most famous impressionist today, lived to the ripe old age of 86 and saw the financial and reputational rewards of his unique talent. His Water Lily series, over 250 paintings of his gardens in Giverny, are the most famous of all impressionist works. Other key Monet works include the Gare Saint-Lazare (paintings of steam engines at this famous Parisian station), Haystacks, Poplars, Rouen Cathedral and the Houses of Parliament.

Paul Cezanne was born in Aix-en Provence and lived from 1839-1906. He was socially awkward, received some of the worst reviews of all the Impressionists, but enjoyed success in his final years. This troubled genius is particularly famous for his Card Players, Large Bathers and paintings of Mont Saint-Victoire in Provence. One of the five versions of the Card Players achieved a world-record price for an impressionist work in February 2002.

Edouard Manet, who died in 1883 at the age of 53, was slightly older than most of the other impressionists, and took the fight to the conservative Academy des Beaux Arts in the 1860s and 1870s. He produced Olympia (a painting of a naked prostitute staring brazenly at the viewer), the most controversial painting of the 19th century and perhaps of all time. It shocked Paris. And he gave the other impressionists the confidence to follow his example and produce their own art. Thank goodness.

Pierre-Auguste Renoir is best known for his glossy, luminous works that evoke a feeling of pure joy in the viewer. Renoir was born into humble circumstances and started out painting porcelain. He funded his own study, lodged with Monet in the early years and became a key member of the group between 1874-1883 painting works such as Luncheon of the Boating Party. But Renoir had a crisis of confidence and his works became more traditional over his so-called Dry Period (c. 1883-1894). Renoir was severely afflicted by arthritis in his old age, but he kept up his prolific output nonetheless. In total, Renoir left around 6,000 canvasses, more than any other major artist save Pablo Picasso.

Edgar Degas is most famous for his works of ballerinas and jockeys, though he completed notable paintings of the New Orleans cotton exchange, singers in nightclubs, the circus, washerwomen and milliners. Degas was a difficult personality, and never married, being described by one of the other impressionists as "intolerable". Failing eyesight and his involvement in the Dreyfus affair (during which he expressed anti-Semitic views) marred Degas' last years.

The stories of the other key impressionists— including Camille Pissarro, Alfred Sisley, Frederic Bazille, Gustave Caillebotte, and Berthe Morisot and Mary Cassatt (the leading female impressionists)—are no less interesting. We describe them on this website.

The names Manet and Monet are very similar and so it is not surprising that they get mixed up and people refer to Edouard Monet and Claude Manet.

This is nothing new. In 1865, Manet caused controversy at the Salon with Olympia. The same year, Monet submitted two seascapes, which received positive reviews. But some people thought that the seascapes were Manet's work and congratulated him (much to Manet's irritation). Indeed, Manet thought that Monet was trading off his name. He fumed

"Who is this Monet whose name sounds just like mine, and who is taking advantage of my notoriety?"

Manet's mood was probably not improved by a review in the La Lune newspaper the next year, which waxed lyrical about Monet's Woman in a Green Dress. It said

“Monet or Manet? Monet. But we have Manet to thank for Monet. Bravo, Monet. Thank you, Manet.”

In truth, the two had very different careers:

Learn more on our Manet vs Monet page.

3. What are the best Impressionist paintings?

This is a tough question. As we've explained, Monet's Water Lilies are the most famous impressionist paintings.

His Haystacks are also extremely well known, as is Manet's Bar at the Folies Bergere and Degas' Dancers.

In terms of importance, then Manet's Dejuner sur l'Herbe and Olympia would rank in the top three, alongside Monet's Impression Sunrise. Manet's two works threw down the gauntlet to the conservative art establishment: he was the subject of hostile abuse when they were exhibited but he did not succumb to it and in the process showed the other impressionists that they too could be true to their artistic style. And Impression Sunrise was the work that earned impressionists their name.

In terms of value, then Cezanne's Card Players--sold for $259 million in 2002--wins hands down (it has an inflation-adjusted price of $338 million). It is followed by Renoir's Bal du Moulin de la Galette (sold in 1990, which would today have a price of $187 million) and Cezanne's Mont St-Victorire (sold to the State of Qatar in 2013 and with an adjusted price of $123 million). Three of the five most expensive impressionist paintings are by Cezanne, with Monet dominating the list of the 20 dearest works (with 10 entries).

Check out our Top 10 Paintings Video:

Who did the impressionists inspire?

Impressionism is the stepping stone between classical and modern art.

This can be seen in many ways. For instance, Manet's Dejuner Sur l'Herbe is sometimes described as the first true work of modern art. This is for two reasons: (1) it does not display lofty figures such as gods, angels or scenes from history; and (2) it does not use the rules of classical perspective. Instead, the work is of a modern scene—perhaps even depicting prostitutes—and the figure in the background seems far too large for the painting to be a convincing depiction of real life.

Manet continued to challenge the prevailing orthodoxy throughout his career. Three other artists are worthy of special mention. Cezanne's later works such as the Bathers make extensive use of geometry. This was taken up by later painters such as Picasso and the other cubists. Monet's later Water Lilies become more and more abstract, paving the way for many of the 20th century's most famous artists (such as Kandinsky, Pollock and Rothko). And Pissarro spent three years working with the pointillists George Seurat and Paul Signac.

Van Gogh, perhaps the most famous artist of all time, and certainly the most famous post-impressionist, spent time with the impressionists in Paris in the mid-1880s before moving to the south of France. It was this period that convinced him to lighten his palette and which inspired his most important works (Self-Portraits, Yellow House, Starry Night etc), executed in the three years preceding his suicide in July 1890.

4. When was the Impressionist period?

Most experts would say the impressionist period lasted from 1863 (when Manet showed Dejeuner sur l'Herbe at the Salon des Refuses) to 1886 (the year of the eighth and final impressionist exhibition).

The key impressionists were born between the early 1830s (Pissarro, Manet) and the early 1840s (Renoir, Monet).

Some (Manet) were born in Paris, while others gravitated towards Paris by the early 1860s (Monet from le Havre, Cezanne from Provence, Pissarro from the Caribbean). They formed a tight-knit group in and around Paris for the next two decades, until the early 1880s.

Manet was the Impressionist's trailblazer: he took on the conservative art establishment when he submitted Dejeuner sur l'Herbe to the annual exhibition of the Fine Arts Academy in 1863 and Olympia two years later.

The impressionists first exhibited together in 1874, holding seven more exhibitions until the group drifted apart in the mid 1880s - with the eighth and final impressionist exhibition held in 1886.