Differences between Monet and Manet

“I always confuse Monet and Manet. Now which one married his mistress?”

After Tess relies “Monet”, Danny retorts: “Right, and then Manet had syphilis”.

Monet did indeed marry his mistress; and Manet died from syphilis at the age of 51. But the two men were also the most important impressionist painters. Read on to discover how Edouard Manet and Claude Monet differed.

Similarities between Monet and Manet

We explain below the key differences between Manet and Monet.

Both Manet and Monet were born in Paris. But Manet was born in January 1832, with Monet coming along eight and a half years later in November 1840.

This age difference meant that Manet established himself as an artist well before Monet.

Indeed, Manet was the first of the impressionists to take on the conservative Academy of Fine Arts in the early 1860s, when he submitted works like Dejeuner sur l’Herbe to its annual exhibition (called 'The Salon'). 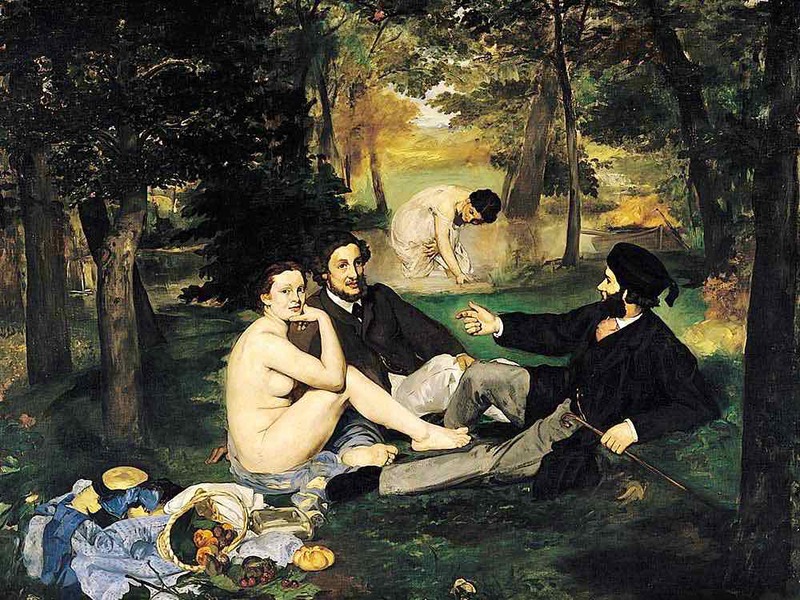 More often than not, Manet’s submissions got rejected. But Manet became famous as a result and inspired the other impressionists, Monet included, to develop a new artistic genre.

The age gap also led to an initially frosty relationship between the two men. In 1865, both Manet and Monet submitted works to The Salon. Manet’s entry was called Olympia, and it got panned by the critics. By contrast, Monet’s two submissions—Mouth of the Seine and The Bridge at Heve—received substantial praise.

One art critic wrote the following about Monet’s submissions:

“Monet or Manet? Monet. But we have Manet to thank for Monet. Bravo, Monet. Thank you, Manet.”

Manet was furious: he thought that Monet was trading off his name!

Generally speaking, Manet was a portraitist (he painted people) and Monet was a landscapist (he, erm, painted landscapes).

In terms of statistics, about 85% of Manet’s works were portraits and about 90% of Monet’s works were landscapes. Typical examples of the two men’s output are found below.

But Manet and Monet were all-round artists. For example, in the 1870s Monet persuaded Manet to try painting outdoors in a more impressionist style. Two paintings from the 1870s—one by Monet, one by Manet—are placed side by side below. Can you tell them apart? **Answer at the foot of the page**

(3) They painted in different ways

First, Manet typically worked in his studio whereas Monet—like most of the other impressionists—mainly worked outside. Manet would spend hundreds of hours painting a portrait, often calling back his model for sitting after sitting. Monet typically worked much faster, using a portable easel and paint stored in metal tubes (a new innovation), in the countryside.

Secondly, Manet’s figures typically have clear-cut edges whereas Monet’s paintings tend to form shapes by blending one colour into another. 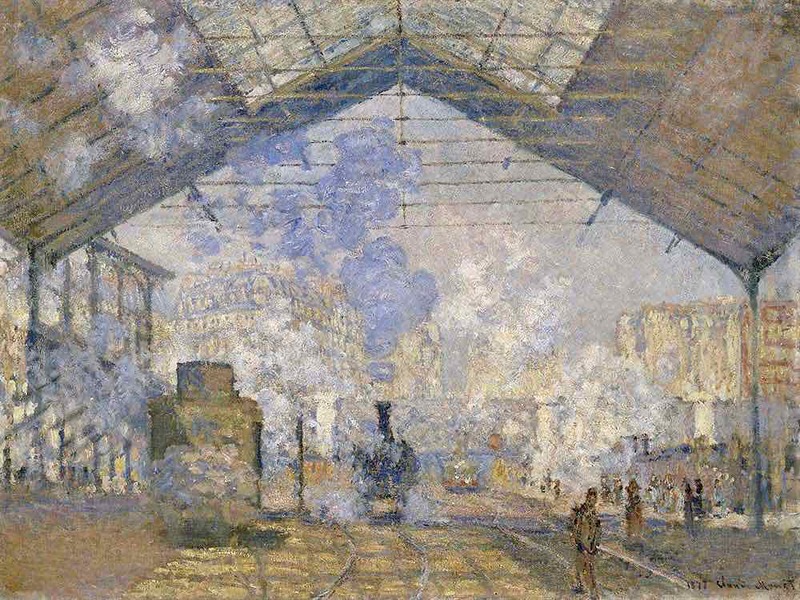 Thirdly, Manet loved using the colour black – as can be seen from works like Music in the Tuileries, Berthe Morisot Reclining and Masked Ball at the Opera. Monet, like the other impressionists, hated using this colour because of its harsh and deadening effect (though he would use dark browns when necessary). 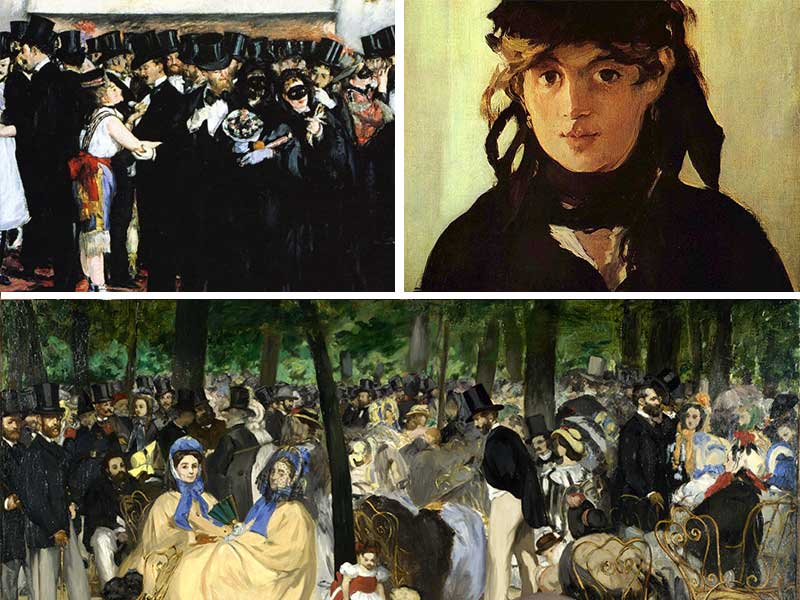 Edouard Manet’s family came from the Parisian upper classes and had serious money: his dad was a senior civil servant and later a judge; his mother was the goddaughter of the Swedish Crown Prince. Manet never had to worry about selling his works to earn a living.

Indeed, in 1867 Manet received a 20,000 franc advance on his inheritance so that he could host an exhibition of his works in a specially-built pavilion.

Claude Monet, by contrast, came from a merchant family and, from at least the late 1860s, had to fend for himself. Monet often struggled to sell his works, and when he did the money was soon spent on Monet’s family and expensive tastes.

As a result, Manet often had to help Monet make ends meet. See, for example, the following begging letter that Monet sent to Manet in 1876:

“Things are going worse and worse. Since the day before yesterday, I have not had a penny, and no credit anywhere — not at the butcher’s or baker’s. Could you possibly send me 20 francs by return? It would tide me over for the moment.”

By 1874, the Impressionists were fed up at being rejected by The Salon. Their solution was to hold their own independent exhibition (they went on to hold eight such exhibitions in total).

Monet was an enthusiastic supporter of the impressionist exhibitions. He was centrally involved in organising the first show, held in 1874, at which he displayed Impression: Sunrise, one of the most famous impressionist works. And he exhibited in four of the later exhibitions (those held in 1876, 1877, 1879 and 1882). 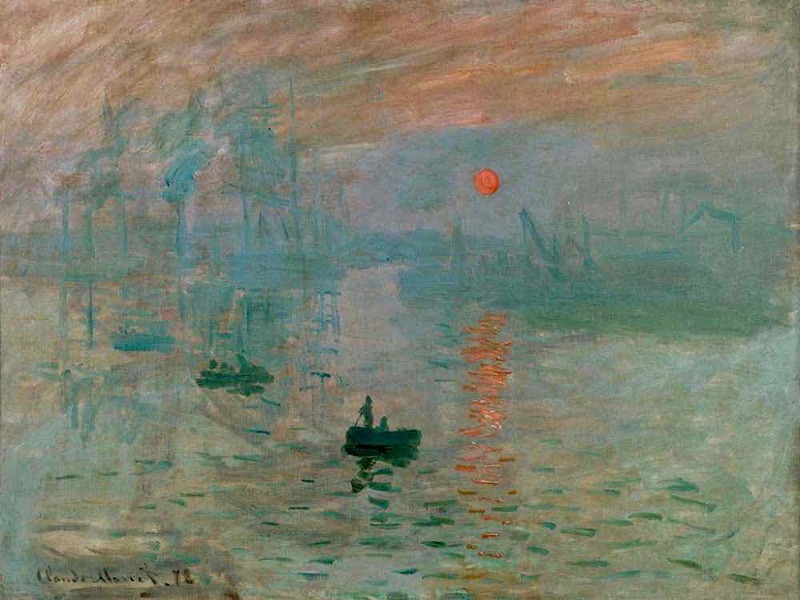 Manet, on the other hand, refused to participate in the independent exhibitions. He wanted to take on the art establishment on its own turf – in The Salon.

Manet was largely unsuccessful in his endeavour to gain acceptance from The Salon's jury: his submissions were usually rejected, though he did score notable successes in 1873 (with Le Bon Bock, pictured below) and 1881 (when he won a second-class medal with his portrait of Henri Rochefort).

By 1880, Manet’s motor skills were starting to desert him.

His doctor, Monsieur Siredey, prescribed a harsh regime designed to improve his circulation: it consisted having his muscles blasted with cold water, and pummelled by aggressive massage, three times a day. But it didn’t work.

Manet, quite the ladies’ man, had contracted syphilis and there was no cure. He battled the disease bravely, producing Bar in the Folies Bergere in 1882. But he deteriorated swiftly the next year, having his left leg amputated below the knee on 20 April 1883. 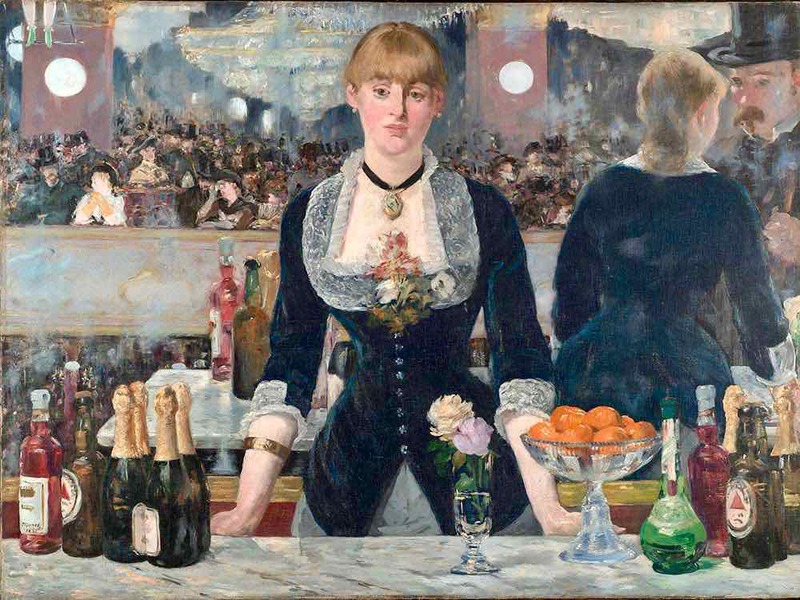 Monet, by contrast, was only just getting started in 1883. He moved to his beloved Giverny that year, from which he produced many of the works for which he is best known: his Water Lilies, Haystacks and Poplars.

Monet lived to the ripe old age of 86, even refusing to leave Giverny when it looked like the Germans would capture Paris at the start of the First World War.

(7) Monet was recognised as a genius in his lifetime

Whilst he had his admirers and the occasional smash hit during his lifetime (eg Le Bon Bock in 1873, pictured above) Edouard Manet was never universally accepted.

For example, when The Salon’s jury rejected Manet’s works from the 1876 exhibition, one of their number remarked:

“we have given Manet a decade to turn over a new leaf, but he refuses to do so. In fact, he grows worse”.

Claude Monet also had his fair share of negative press. For example, in 1874 one acidic commentator remarked as follows of Impression: Sunrise:

However, public opinion started to change in the late 1880s and early 1890s, when Monet’s collections of paintings of Poplars, Haystacks and Rouen Cathedral were snapped up by eager buyers (often from the USA). 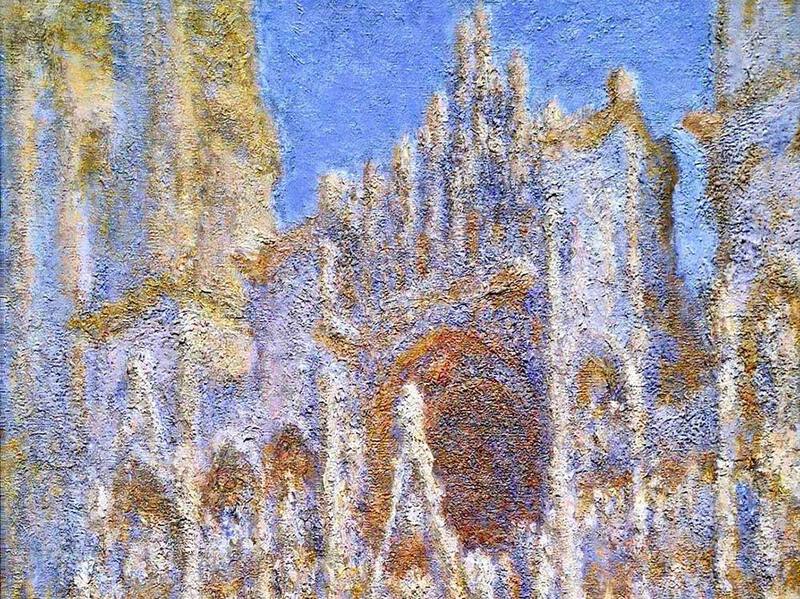 With the possible exceptions of Vincent van Gogh and Pablo Picasso, Claude Monet is the world's most famous artist. His water lilies, poplars, haystacks and other motifs are plastered over calendars, tea-towels, chocolate boxes, jigsaw puzzles and much more.

This is down to both Monet's genius and his industry: he kept producing works of breathtaking beauty until well into his 80s.

Those masterpieces adorn the world's top museums and are in part responsible for keeping the art market buoyant: of the 20 most expensive impressionist works, 12 are Monets (and only two are Manets).

** The left hand picture (with the woman and child) is Manet; the brighter picture on the right is Monet **

2. Similarities between Monet and Manet

Despite these differences, Monet and Manet had lots of similarities too.

There are a host of obvious points: they were French men, with very similar names, born in the same city within a decade of each other, who were both impressionist painters and firm friends.

But there are other points that may be explored a little further.

Monet and Manet both supported the impressionists

Manet was the initial trailblazer who took on The Salon. He was friends with Monet, Degas, Pissarro and Renoir - and he tolerated Cezanne, who he regarded as uncouth - and provided them with pastoral and often financial support.

Monet was also friends with the key impressionists. Whilst he did not have money to dole out, he was closely involved in organising the first impressionist exhibition - where the impressionists banded together for the first time to show their works to a sceptical public.

Monet and Manet both liked the ladies

Both Monet and Manet had complicated love lives.

Kicking off with Monet: 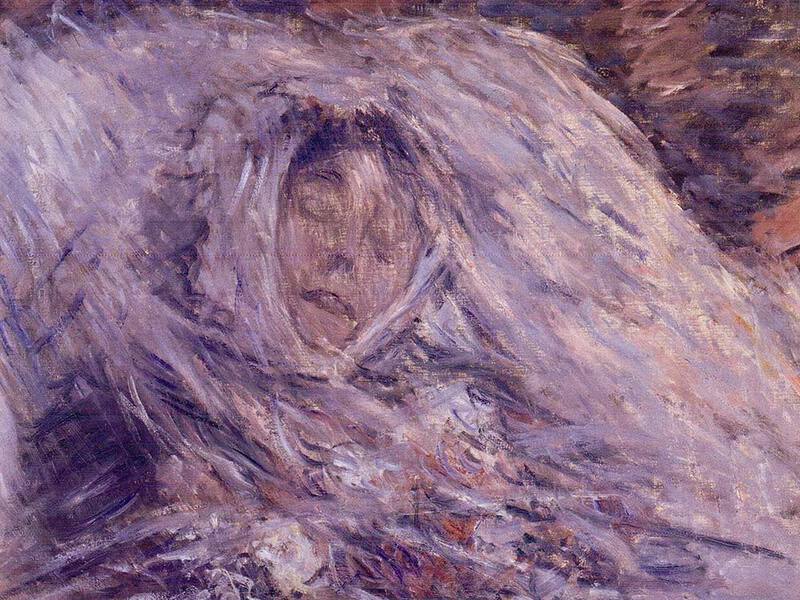 Manet's love life was, if anything, even more complicated: 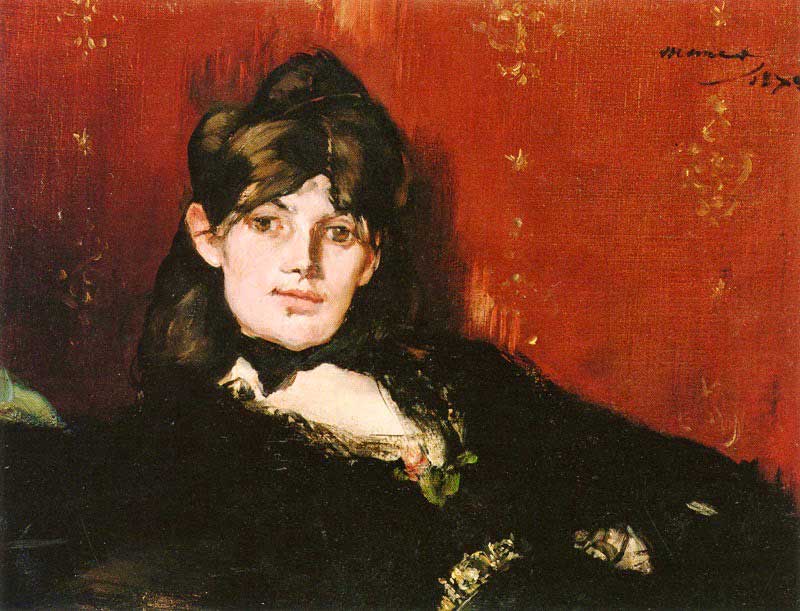