The Musee d'Orsay, on the left bank of the Seine, holds the world's most comprehensive collection of impressionist masterpieces.

Opened in 1986, the d'Orsay focusses on French art from between 1848 and 1914 (there are some exceptions). The museum therefore bridges the gap between classical art, housed in the Louvre, and modern art, found in the Pompidou Centre.

The d'Orsay typically displays about 3,000 works at any one time, and ranks 15th on the list of the world's most popular museums.

But art is only part of the attraction: the Musee d'Orsay is a stunning structure, converted into an art gallery from the Gare d'Orsay railway station; and the museum boasts fantastic gift shops, an art library, a high-end restaurant and an excellent and stylish cafe on its fifth floor.

Impressionism at the d'Orsay: Manet & Monet

Impressionism at the d'Orsay: Renoir & Degas

Impressionism at the d'Orsay: Cezanne & Pissarro

Impressionism at the d'Orsay: More

More things to do and see at the d'Orsay

1. Impressionism at the d'Orsay: Manet & Monet

The d'Orsay holds a remarkable 407 works by the nine key impressionist painters.

In addition, there are a huge number of works by pre- and post-impressionists, including 24 van Goghs and 24 Gauguins.

The d'Orsay probably holds the world's finest collection of works by Edouard Manet. Chief amongst them are Dejeuner sur l'Herbe and Olympia.

Painted in the early 1860s, Manet submitted these works to the annual Salon (Exhibition) of the Academy des Beaux Arts, throwing down the gauntlet to their jury who preferred more traditional works.

Other important Manets include Berthe Morisot with a Bouquet of Violets, At the Beach, the Balcony, and the Piper (a portrait of his son, Leon).

Of the 86 works by Claude Monet, I would single out three as being particularly interesting.

There are also two key works from Monet's early career, Luncheon on the Grass and Women in the Garden. 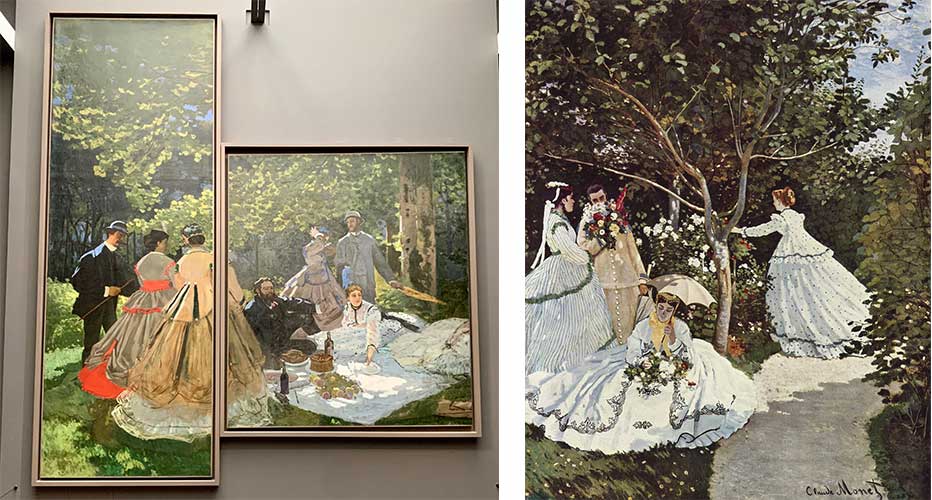 Luncheon on the Grass (1865-6) is interesting because of its size: Monet's canvas was about six by four metres, and required the digging of a trench and a complicated pully system so that Monet could paint it! A homage to Manet's Dejeuner sur l'Herbe, Monet's effort languished in his landlord's basement for years and grew mouldy - only two portions remain!

Women in the Garden (1866) is another early attempt at en plein air (outdoor) painting. But the composition doesn't really work: whilst some of the figures are lifelike, the woman in the background for me looks a bit like a ghost and another of the women has a distinctly masculine appearance.

There are then lots of classic paintings from Monet's series of works: Houses of Parliament, Poplars, Rouen Cathedral, Haystacks and Water Lilies are all represented.

2. Impressionism at the d'Orsay: Renoir & Degas

Pierre-Auguste Renoir had a particular knack for painting women and scenes of pure joy.

The d'Orsay's most important Renoir, which ticks both boxes, is Bal du moulin de la Galette (Dance at the Galette Windmill). Note the use of light and shadow and the riotous modern scene, both key traits of impressionist painting. 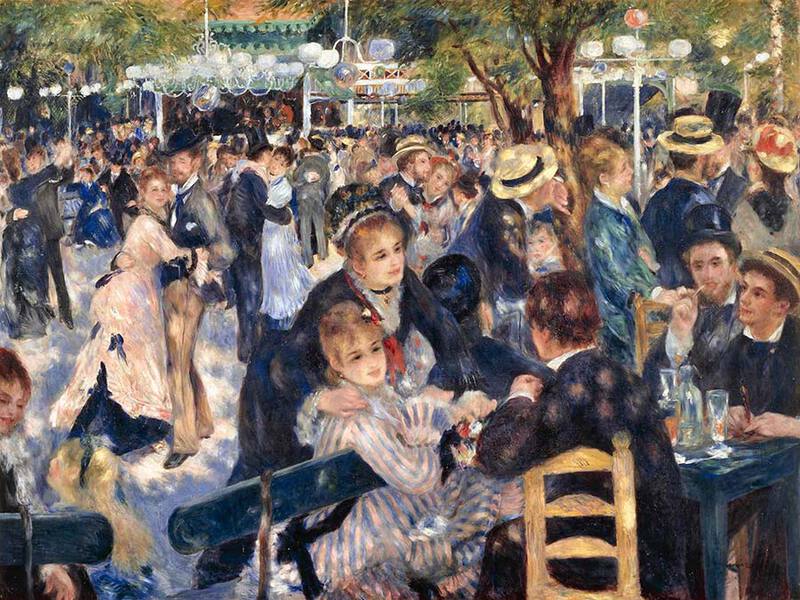 The next most famous Renoir on display is La Balancoire (the Swing), from 1876, which features a grown woman on a swing. It is unclear what is going on: perhaps she is being courted, for she is certainly looking a little coy.

We also highlight Renoir's Dance in the City and Dance in the Country, presented side-by-side. The third painting of the trilogy, Dance at Bougival, is found in Boston's Fine Arts Museum. 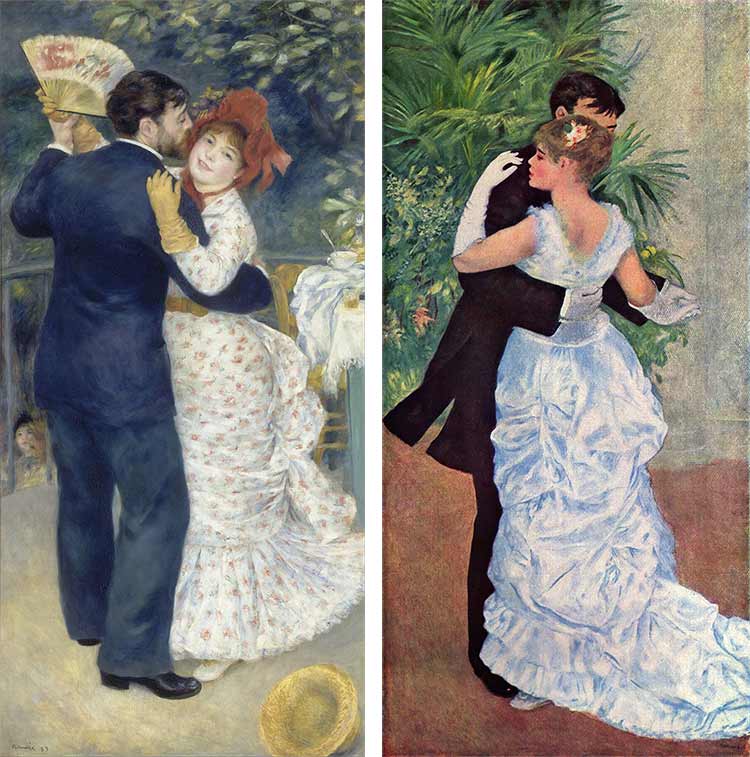 Other gems from Renoir's oeuvre include Girls at the Piano, Bathers and Frederic Bazille at his Easel.

Edgar Degas, best known for his works of ballerinas and jockeys, was a difficult individual (he was a misanthrope and anti-semite).

But there is no denying that he produced works of breathtaking beauty and novelty.

The d'Orsay has a an impressive collection of Degas' scenes from the Paris ballet, for example the Ballet's Orchestra (with the dancers featuring in the background), Dance Class (depicting the hard life faced by ballerinas) and Ballet (L'Etoile) (showing a performing dancer and a sinister male figure waiting in the wings). These three works are shown below.

Sticking with the ballet theme, the d'Orsay also boasts Degas' Little Dancer, a life-sized sculpture of a 14-year old ballerina. 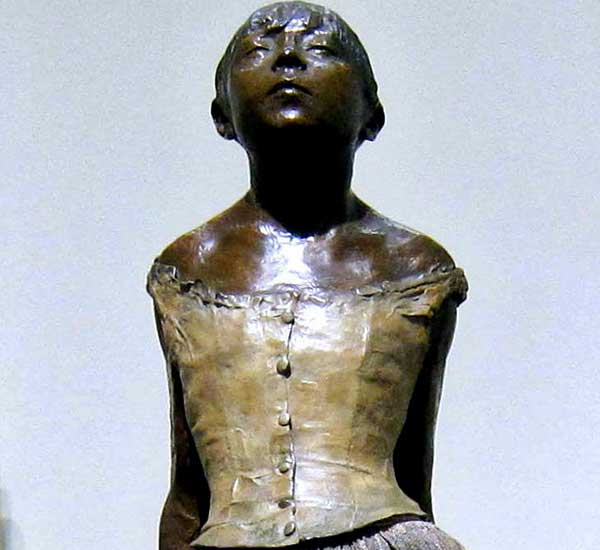 We also mention Degas' In the Cafe (or Absinthe Drinker), another example of Degas painting real-world - and not idealised - scenes. 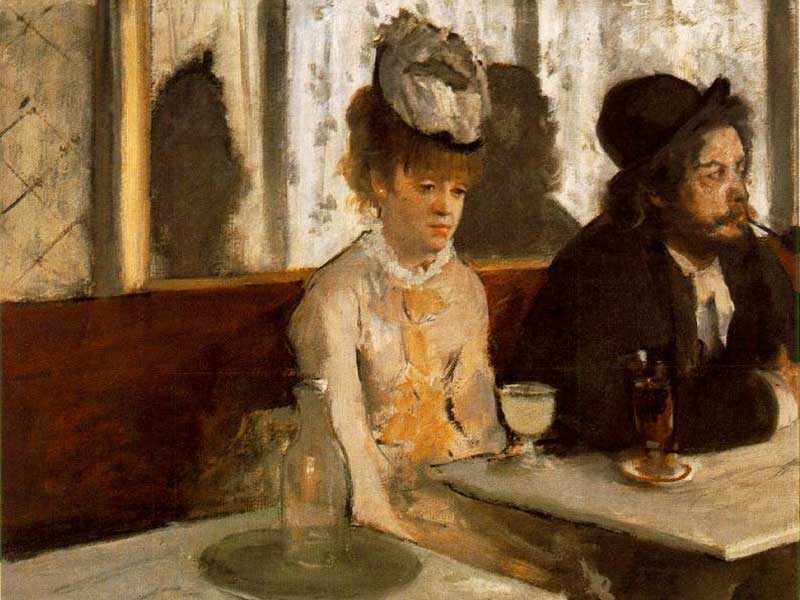 3. Impressionism at the d'Orsay: Cezanne & Pissarro

Paul Cezanne was perhaps the most unpopular of the impressionists throughout the 1860s and 1870s. His unusual works were castigated by the critics and his low self-esteem meant that he often returned to his family home in Aix seeking solace.

Today, however, he is one of the most important impressionists, with his later works providing a key bridge between impressionism and 20th century art.

The d'Orsay's most famous Cezanne is one of the five versions of the Card Players (another version of which holds the world record for the most expensive impressionist work). 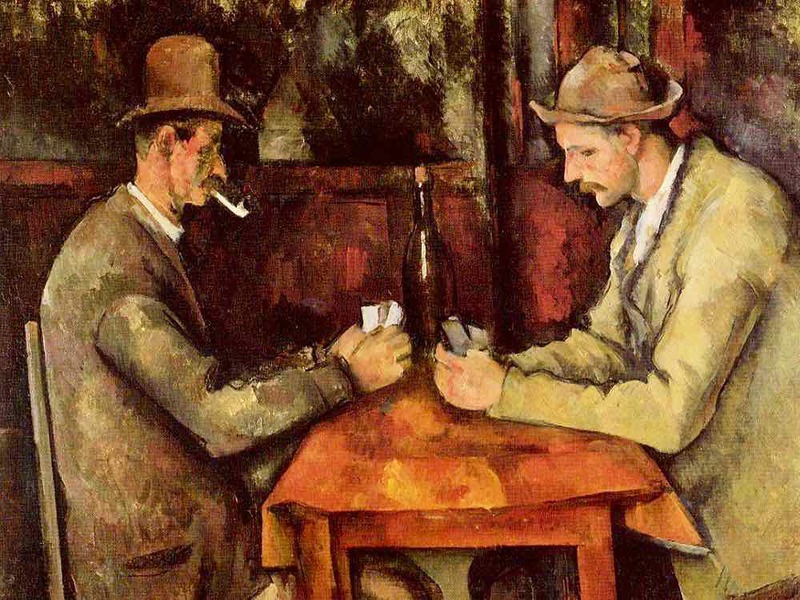 The d'Orsay also holds numerous versions of Cezanne's nude bathers, a subject that fascinated him during the last 25 years of his life. Cezanne painted either men or women, usually obscuring their facial features. Here's an example, painted in 1890: 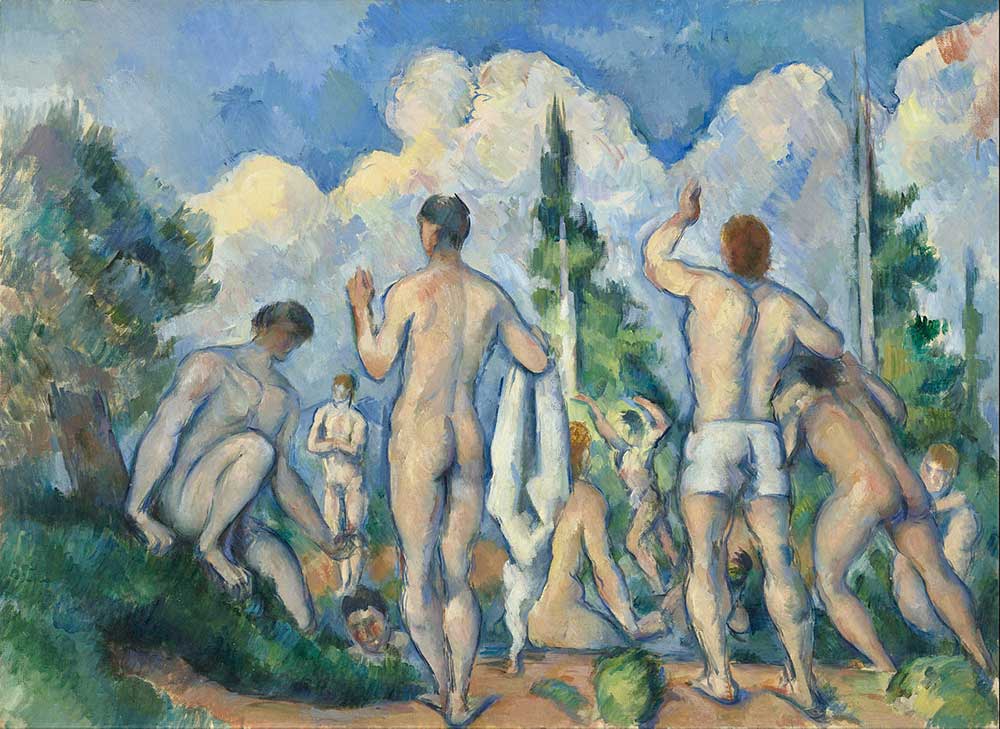 The d'Orsay also holds a number of Cezanne's still lives and portraits, including a rare self-portrait from 1875 as seen below. 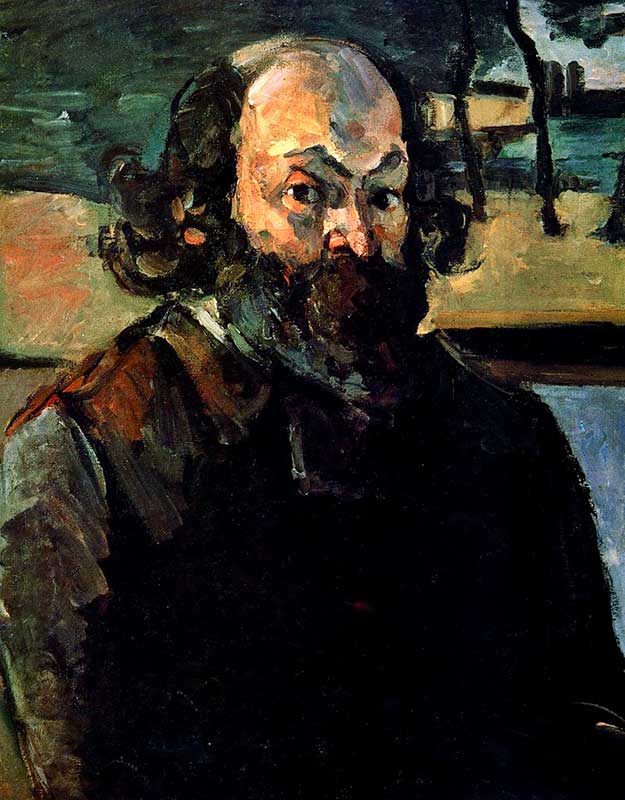 Camille Pissarro, the elder-statesmen of the impressionist movement, is well known for his scenes of the countryside around Paris. The d'Orsay has a number of great examples.

Our first selection is Pissarro's Morning Sun in the Autumn (Soleil de Matin, Automne). A bright painting of a woman tending her garden, this is a work that brings a smile to your face! 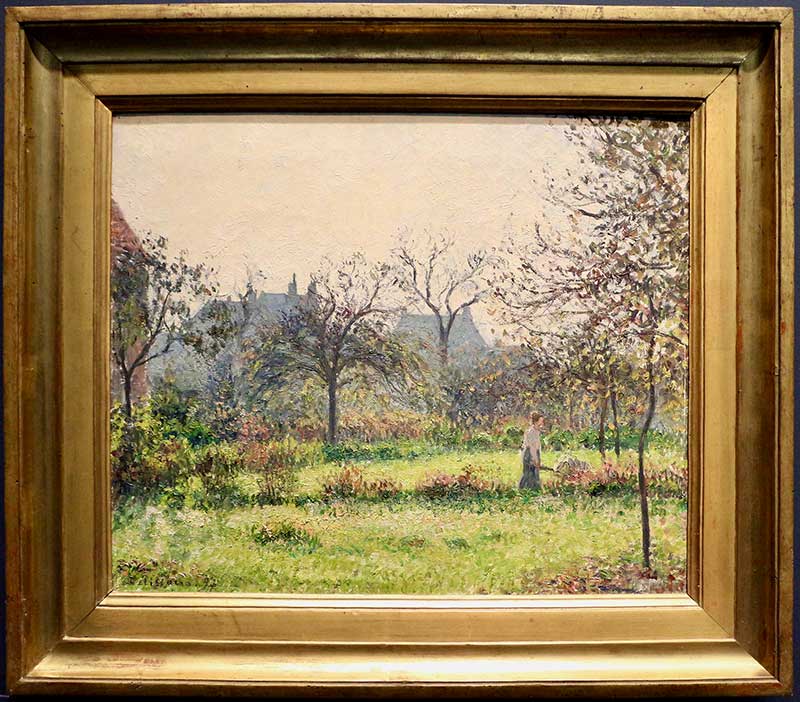 Other lovely Pissarro's include Plum Blossoms in Spring (Printemps, Pruniers en fleurs), from 1877, a self-portrait from 1873, and The Shepardess (La Bergere), from 1881.

4. Impressionism at the d'Orsay: More

As noted above, Morisot, Bazille and Sisley - some of the relatively unsung stars of the impressionist movement - also feature heavily in the d'Orsay's holdings.

The most famous work by Berthe Morisot on display is The Cradle, a heartwarming scene of a mother looking adoringly at her newborn child. This is Morisot's most famous work, featuring her sister (Edma) and Edma's daughter (Blanche). Painted in 1872, the work was displayed at the first impressionist exhibition and went unsold until it was acquired by The Louvre in 1920. 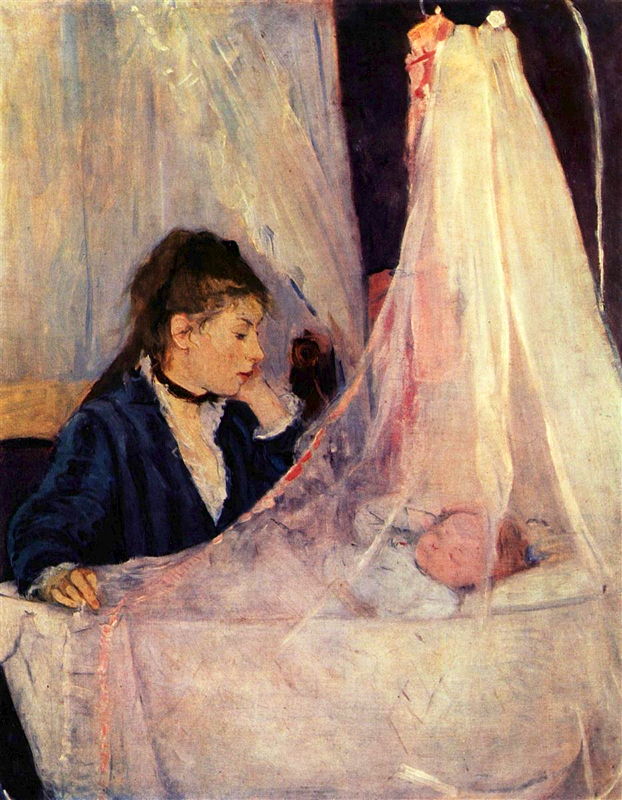 Two works by Frederic Bazille call out for mention. The first is Bazille's Studio, painted months before his death, and featuring Bazille, Manet, Monet and others from their circle. The painting is a homage to Manet, with the painters surrounded by canvasses rejected by the Paris Salon. Sadly, Bazille was to be killed in battle months after the work was completed. 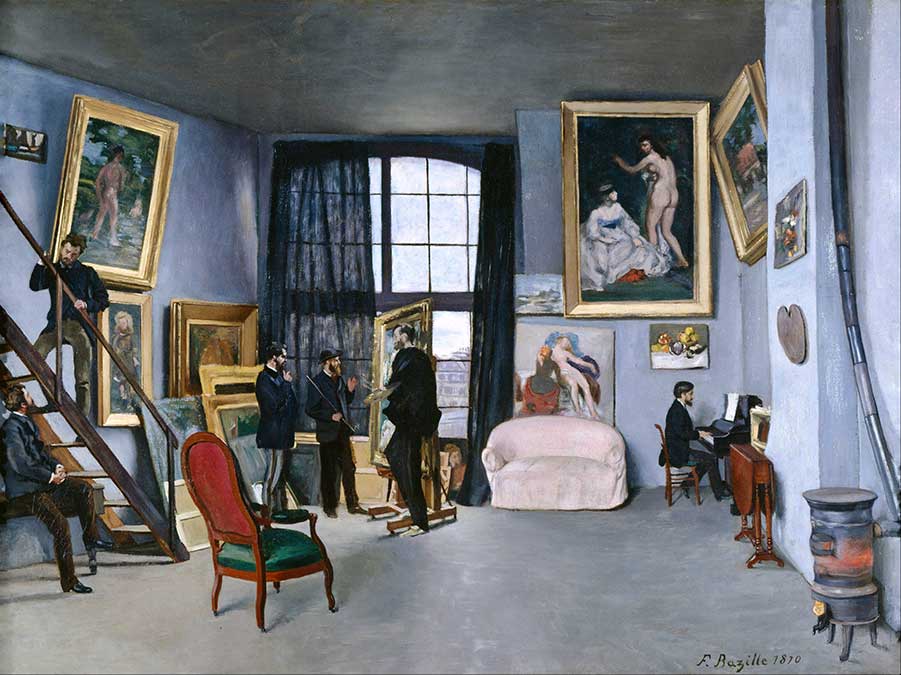 The second is Bazille's Family Reunion, painted three years earlier, showing a group of ten of Bazille's closest relations posing for a rather cold and stiff group portrait (family tensions seem to radiate from the portrait). This work was, to Bazille's surprise, accepted by the Salon - something Bazille said was "probably a mistake"!

Last but not least, the d'Orsay displays a number of Alfred Sisley's best canvasses. Known for his more muted colours and exclusively landscape output, Sisley is often a footnote in the story of impressionism. But we love the subtlety and beauty of Snow at Louveciennes and Fog at Voisins.

5. More things to do and see at the d'Orsay

The d'Orsay offers a lot besides impressionism.

The d'Orsay holds 24 works by the most famous painter of all time, Vincent van Gogh. Three call out for particular mention:

Van Gogh's Starry Night over the Rhone is only slightly less famous than the version of Starry Night now held in New York's MoMA. The d'Orsay's version, painted two months earlier in September 1888, is more serene and features two lovers hidden in the shadows of the foreground. 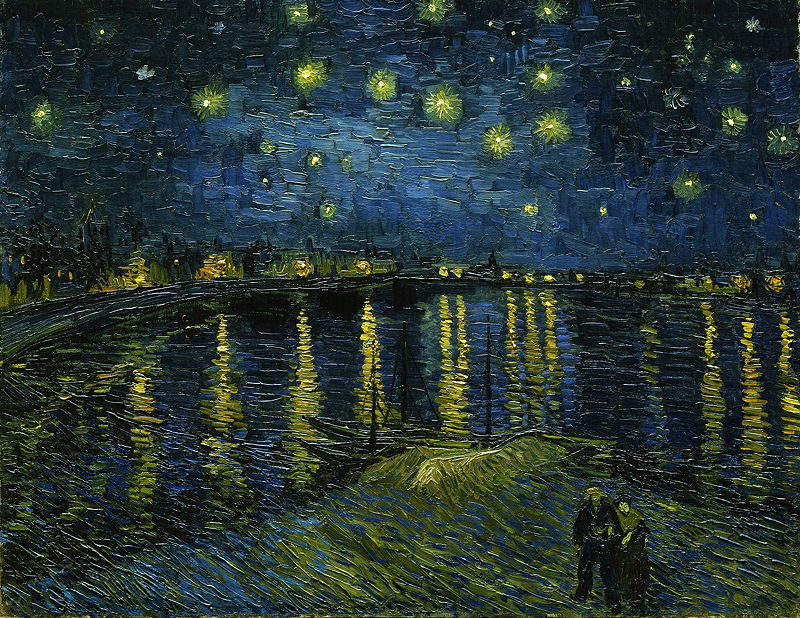 The other two paintings are Van Gogh's Bedroom in Arles and The Church at Auvers-sur-Oise. The first is one of three paintings of Van Gogh's Bedroom, sparsely decorated except for artwork on the walls and using colours inspired by van Gogh's love of Japanese art. The second, of a church in a village close to Paris where van Gogh committed suicide, is noteworthy for its beautiful colours and the use of wavy lines to show the church's structure - an example of van Gogh's move towards expressionism.

The d'Orsay boasts one of the world's most stylish cafes on its fifth floor, adjacent to its most important gallery of impressionist holdings. Cafe Campana is the perfect place to grab a restorative coffee and cake before moving on to some of the other fifth floor galleries (think van Gogh and Toulouse-Lautrec) or exploring the earlier works of many of the impressionists housed on the ground floor. Designed by the Campana brothers, famous Brazilian interior designers. 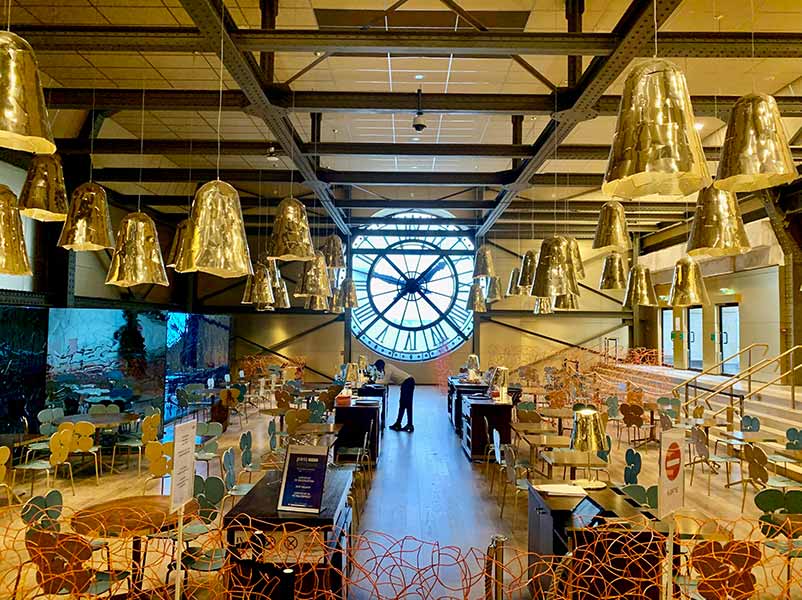 The Musee d'Orsay Restaurant, formerly the restaurant of the Hotel d'Orsay, offers French comfort food at reasonable prices. The two-course Formules Dejeuner is priced at EUR27, with a la carte mains price at EUR20-30. The restaurant is stunning: ten chandeliers and frescoes by Gabriel Ferrier and Benjamin Constant line the ceilings.